location_on Are you located in Spain ?

Liposomal Curcumin is the most bioavailable form of curcumin.

The powdered rhizome of turmeric has been extensively used in India and other South Asian cuisines, and is an integral part of Ayurvedic medicine for a broad range of conditions. In particular, curcumin, a major active component of turmeric, is one of the most studied botanicals for its anti-inflammatory, anti-oxidant properties.

Turmeric has been used in India for thousands of years as a spice and medicinal herb. It has powerful anti-inflammatory effects and is a very strong antioxidant. Curcumin boosts levels of the brain hormone, which increases the growth of new neurons and fights various degenerative processes in the brain. Not only can curcumin help modulate inflammation throughout cardiovascular system it also supports normal cholesterol, triglyceride, and blood sugar levels.

Curcumin bioavailability has always been an issue for sustainable availability, and thanks to a new innovative patented technology PNS (Polar-Non-polar Sandwiching) of the Aurea Biolabs company has solved the issue.

Aurea Biolabs is focused on nutraceutical product development, extraction, isolation and formulation of bio-active ingredients from spices and other natural extracts. Curcumin as a product is not entirely bio available in the human system. This has been solved by Aurea Biolabs by making use of the PNS technology which is patented. All molecules of Turmeric are used in this formulation resulting in a 100% Natural Turmeric Matrix with a high content of Curcumin, which can bring in the true synergies of all the molecules of Turmeric.

Cureit** is 1more bio-efficient compared to normal curcumin. The product as well the process (PNS technology) is patented and this is the only curcumin extract which has the full turmeric matrix. As the product is available in blood and in tissues, the functional efficacy is more.

This allows the curcumin to safely pass through your digestive system and be absorbed into the bloodstream, where it is needed most to be effective. 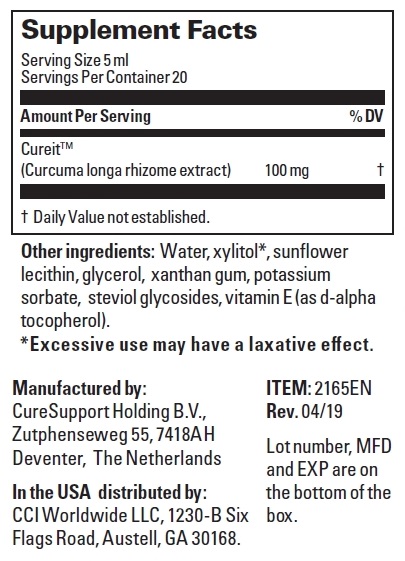